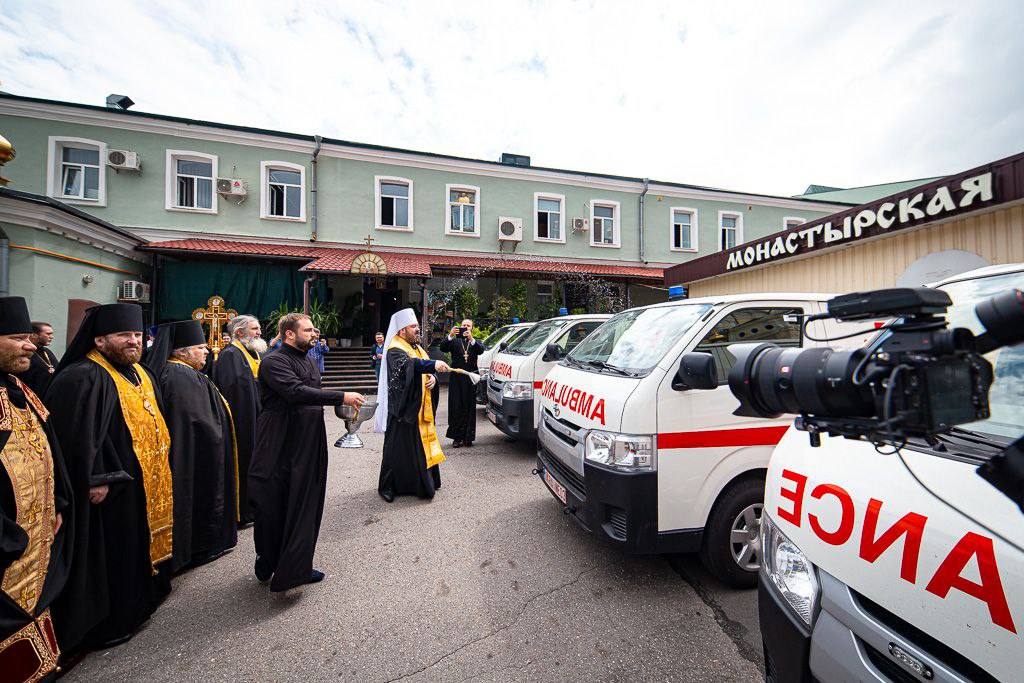 Religion
Religion
Charity
News
Metropolitan Onuphrius of Kharkiv and Bogoduhiv, on behalf of the UOC on the territory of the Holy Intercession Monastery, handed over 10 ambulances, which were purchased in European Union countries by Vadym Novynskyi Foundation, to the mayor of Kharkiv, Igor Terekhov.

"I want to express special thanks to Father Vadym Novynskyi, his Foundation, which does not forget Kharkiv and repeatedly helps the city and our Kharkiv Diocese. Today, we are handing over ambulances to the Kharkiv community, which the citizens are in great need of," Metropolitan Onuphrius commented on the event.

Kharkiv Mayor Ihor Terekhov, who received the ambulance, said: "Today is a significant event for Kharkiv. Thanks to the Church, thanks to the efforts of patrons, we get these ambulances, which will work, saving the lives of not only Kharkiv residents, but people from all over Ukraine. Today people from all corners of our Motherland are defending Kharkiv and defending the independence of our country. May the Lord hear us, we will stand, we will win and together we will rebuild our city, it will be even better, more convenient and comfortable."

Dmitry Sergeev, director of the Fund, noted: "Every day, the cars that we purchase in the EU countries go to regions where hostilities are taking place, where transport for the evacuation of the wounded is vital. Today it is Kharkiv, many cars have been transferred to Zaporizhzhia, Kryvyi Rih, Mykolaiv and other cities. This is one of the largest humanitarian projects to provide Ukraine with medical transport after February 24. We implement it jointly with the Ukrainian Orthodox Church."

Earlier, Dmytro Sergeyev stated that the goal of the Foundation is to deliver at least 100 cars to Ukraine. 81 cars have already been imported to the country. Ambulances have already been handed over to the Department of Health Protection of Mykolaiv City Council. Before that, dozens of machines were sent to hospitals in Zaporizhzhia and Kryvyi Rih, to the volunteer organization Center for Saving Life, one of the machines works in Sumy region, and 2 machines were transferred to Amosov National Institute of Cardiovascular Surgery for mobile brigades.

Vadym Novynskyi Foundation also sent UAH 3 million to organize humanitarian aid for residents of Kharkiv region. The funds were transferred to the Kharkiv Eparchy of the Ukrainian Orthodox Church to provide food and medical assistance to the population that finds shelter on the territory of Orthodox churches.