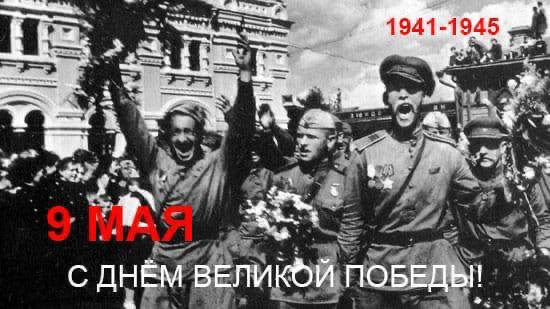 Today is the Victory Day!

The day of our people's victory in the Great Patriotic War.

Patriotic war is called a war that uses all available resources, the entire human potential of the country to repel the enemy's aggression. A war in which not only the regular army takes part, but the entire civilian population is involved in the fight for a common victory. This is a war in which the very fate of the Fatherland and its future are at stake.

Ukraine, which lost 6.8 million people, has the right to consider this war as the Patriotic War. After all, people gave their lives not for Stalin, not for communism – they were going into battle defending their wives, their elderly, their children and their homes. They were going for their Fatherland, for everything they had, everything that was dear and sacred to them.

Today there are many those who want to reconsider the history and rewrite the events of 1941-1945 in a new way. For them, the Soviet Union is as much an enslaver as Germany. For them, the Ukrainian Insurgent Army (UPA) is the only force that represented the interests of the Ukrainian people during the war. For them, Soviet military leaders and commanders are criminals and "bloody butchers". For them, the Nazi regime is not an obvious evil, and Soviet soldiers are not obvious victors. There is an entire industry of propaganda working today in order to defame the Feat of our people. The pinnacle of cynicism is the statement that the real winners in the war were American and British soldiers, while Soviet soldiers were simply a misfit. These statements are openly voiced today by politicians, journalists and political experts!

The ninth of May should not be limited to just formally showing respect to the surviving veterans of whom there are very few left today. The ninth of May is, first of all, the Day of our gratitude for that Victory, which gave us, now living, a chance for life, for the right to enjoy this life and continue it – in our children and grandchildren. This is our day of thanksgiving to those who gave their lives so that we could live today. This is the day when light triumphed over darkness.

It cannot be the Day of Sorrow. It cannot be the Day of Reconciliation. It can only be Victory Day, a bright, joyful and pure holiday that encourages us for new victories. And it can only be on the ninth of May – after all, it was on the ninth of May 1945, at 01:00 o'clock Moscow time (which was valid at that time both for Kyiv and for all of Ukraine) that Nazi Germany finally surrendered.

Sagging under fashionable Western trends and traditions, trying to please overseas "partners", we emasculate our history and betray our ancestors. We gave up many positive things in our past, but the Great Victory is what requires protection from those who want to spoil, to tarnish and distort it.

Today we must protect the Victory and the Victors – the memory of them, the truth about them – from those who, while selling out their country, are ready to sell its history as well. This is our duty.