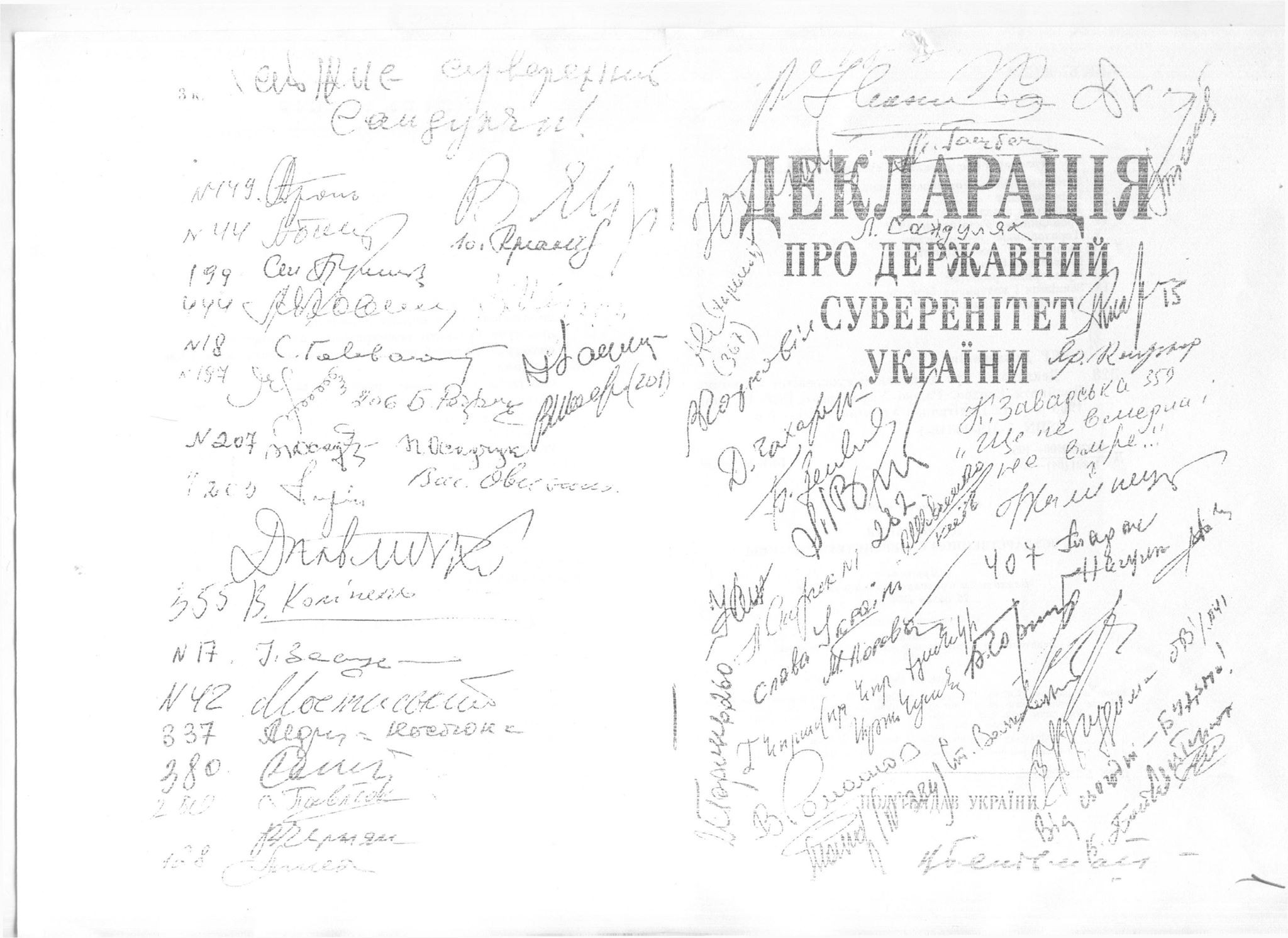 29 years ago, on 16 July 1990, the Verkhovna Rada, fulfilling the will of the Ukrainian people, adopted a fateful document – the Declaration of State Sovereignty of the Ukrainian SSR. It was an important step towards building of a state, which laid the foundations of the constitutional system. The young Ukrainian state committed itself to become constantly neutral, not to participate in military blocs and to observe three non-nuclear principles: not to accept, not to produce and not to acquire nuclear weapons. The Declaration of Independence Act of 24 August 1991, which, in turn, is based on the preamble of the Constitution, has become a tool for implementing the Declaration of State Sovereignty. These three most important documents consistently implement the will of the Ukrainian people about a strong, independent and neutral Ukraine. It is unacceptable to revise the basic documents and rewrite the will of the people following some immediate needs of individual politicians.

The Opposition Bloc advocates strict adherence to the principles of the rule of law and neutrality that are fundamental to the state. This is the foundation our common home – a multinational, civilized and peaceful Ukraine – stands on.

All related news
Other news
Religion
Nativity of Virgin Mary
Today the Orthodox Church Celebrates the Nativity of Our Most Holy Lady Theotokos and Ever-Virgin Mary.
Religion
The church new year
On September 14, Orthodox Christians celebrate the church new year.
Religion
Day of the Beheading of Saint John the Baptist
Today we remember a great and righteous man and a Prophet, a saint most revered by our Church – John the Baptist and Forerunner of the Lord.
Growth of Ukraine
“Metinvest Together! psychological service” helps over 1,100 employees
Metinvest Together! psychological service was launched as a response to life challenges, to help the company’s employees during the war. The project is a success, judging by 1,113 individual and group support sessions as well as a number of positive ...
Growth of Ukraine
"Metinvest" once again confirms the fulfillment of its debt obligations, having paid the coupon for Eurobonds-2027
Metinvest B.V. (Netherlands) reaffirms the continued fulfillment of its debt obligations, in particular to bondholders, despite the war in Ukraine.
Growth of Ukraine
Speech by CEO "Smart Holding" at the economic forum in the Polish city of Karpach
"The beneficiary of the Marshall Plan is not only Ukraine. This is the Plan for the Reformation of Europe" — the speech of the CEO of "Smart Holding" at the economic forum in the Polish city of Karpacz
Growth of Ukraine
Smart Energy Group paid 1.84 bln UAH in taxes in the first half of 2022
In the first half of the current year, the companies of Smart Energy Group paid a total of 1.84 bln UAH in taxes to the budgets of all levels, including 772.4 mln UAH of rent payments for the subsoil use.
Religion
The Dormition of the Most Holy Theotokos
I heartily congratulate you on the Great Feast — the Dormition of the Most Holy Theotokos, the Passover of the Mother of God.
Religion
55th birth anniversary of Metropolitan Anthony of Boryspil and Brovary
Today, Metropolitan of Boryspil and Brovary Anthony (Pakanich), Director of Affairs of the Ukrainian Orthodox Church, is celebrating his 55th birthday.
Subscribe to news