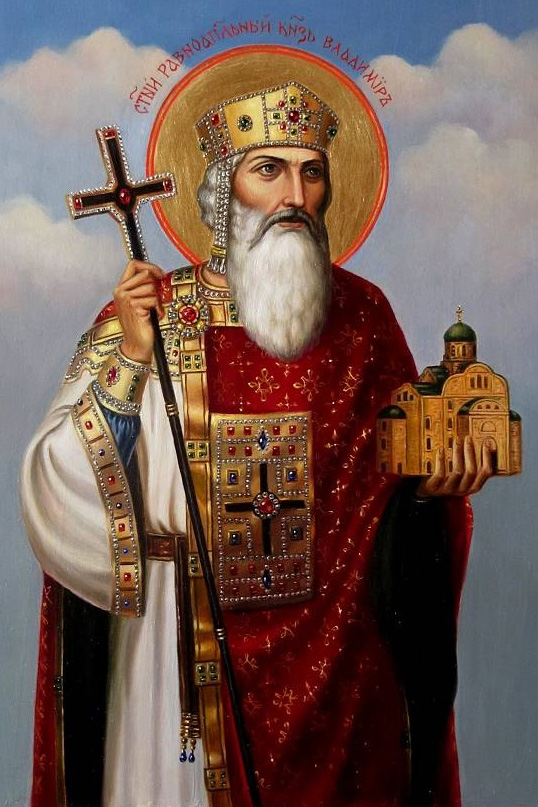 Today the Orthodox Church celebrates the Day of Remembrance of the Holy Equal-to-the-Apostles Prince Volodymyr and the Day of the Baptism of Rus.

These holidays are united not by chance. It was Saint Prince Volodymyr who laid the cornerstone in the foundation of Kyiv Rus, of which we are the heirs.

One thousand and thirty-four years ago, the prophecy of the Holy Apostle Andrew the First-Called came true, and the grace of the Lord shone on the banks of the Dnieper. One thousand and thirty-four years ago, Prince Volodymyr baptized Rus and by this act changed the course of history for millions of people throughout the vast expanse of Eastern Europe. Orthodoxy breathed new life, new meanings, new traditions and new culture into the peoples and tribes that inhabited Kyiv Rus. Very little time would pass, and it is these lands, baptized by Volodymyr and his sons and associates, that would become a real stronghold of the world Orthodoxy.

This holiday reminds us of how important the role of the individual is at turning points in history, what a great responsibility lies with the leader, who, with one decision, can plunge his people into hopeless chaos or provide them with many years of prosperity and development.

Prince Volodymyr was a brave warrior and a wise politician. By accepting Christ with all his heart, he completely changed his life. As the prince said about himself, “I was a beast, but I became a man.”

Today it is especially painful to see the fratricidal war that is being waged between the peoples who came out of the common font of the Kyiv baptism, united by the common waters of the Dnieper, professing the same faith. Probably, at the end of his life, it was painful for Volodymyr himself to realize the growing enmity between his sons – an enmity that immediately after the death of the Baptist of Rus led to a brutal war and the death of the holy faithful Borys and Glib, to the martyrdom of Svyatoslav Volodymyrovych, to the plunder of Rus by the "allies" – Poles and Varangians... But it was faith – the new Christian faith – that made it possible to survive, win and elevate Rus to its new heights.

So it will be now! Faith will save, faith will help to win and be reborn. Faith will help overcome the clouding of the mind and the temptations that lead to war those to whom history itself prescribed to live in peace. Orthodoxy will triumph, and the tempter, bringing war and strife to the world, will again be defeated and put to shame!

Today we gratefully honour Prince Volodymyr for us being in the bosom of the Holy Orthodox Church of Christ, and for living on the blessed and God-saved Ukrainian land.

The Church is the only force that can instil true and eternal values in us, unite all of us, so different and so similar, and change our lives for the better. The Church of Christ is a divine-human organism. God is with us! And it is precisely in this that our spiritual wealth and strength lies.

I wish all of you, dear friends, peace and love, since peace between people begins with light in their hearts, and the highest love for humanity begins with love for the closest. I wish you strength and patience to adequately pass the difficult trials that have befallen our fate. And may the Lord, by His mercy and the prayers of the Holy Equal-to-the-Apostles Prince Volodymyr, grant grace, peace and new prosperity to Ukraine and to all our people.

Good health to you!