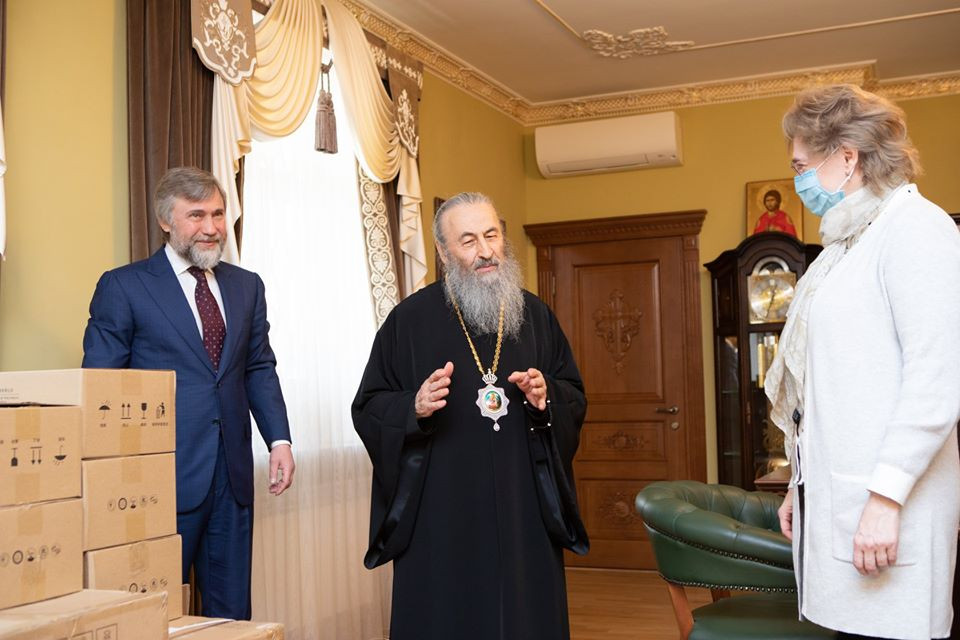 The Primate of the Ukrainian Orthodox Church (UOC), His Beatitude Metropolitan Onufriy and the founder of the Foundation, Vadym Novynskyi, provided the doctors of Oleksandrivska Clinical Hospital with the latest-generation lung ventilator designed to simultaneously operate for two patients, as well as a hundred of reusable protective suits and a hundred of protective goggles.

The medical equipment was handed over to representatives of the clinic by the Primate of the UOC, His Beatitude Metropolitan Onufriy at his residence in Kyiv Pechersk Lavra. The Head of the Church blessed the medical staff of the clinical hospital, as well as all representatives of the medical professions in Ukraine: ‘God's blessing to all healthcare professionals, all those who work hard today, who show love for their neighbours every day. This is especially valuable when these neighbours are in trouble. May God bless and protect you!’

In his turn, Vadym Novynskyi noted that the Ukrainian Orthodox Church supported the domestic healthcare system and healthcare professionals not only with a prayer, but also with real deeds. He is confident that today all Ukrainians need to follow the example of the Church, need to put away all political and other disagreements, and rather need to focus on fighting the global pandemic and its consequences.

‘Only the consolidated efforts of the President, the parliament and the government, central and local authorities, businesses and citizens will bring a result. Already now, we are facing a huge shortage of equipment and protective gear globally. All budgetary funds now need to be redistributed to the Ministry of Health and paid to medical staff as financial assistance and bonuses. The media and bloggers should show their responsibility to Ukraine by not spreading panic. And we, of course, must remember that only with God's help will we overcome this terrible disease,’ said the MP.

Earlier, Vadym Novynskyi's Foundation purchased 10 highly efficient medical ventilators, 850 sets of personal protective equipment for medical staff and 10,000 rapid tests in China. The equipment and the tests are now being distributed to specialized medical facilities in the regions. This Sunday, thousands of high-class protective suits and respirators for medical personnel, purchased by the Foundation, were delivered from China with the second aircraft. They have been distributed to Donetsk, Kherson, Mykolaiv, Zaporizhzhya, Dnipropetrovsk and Kharkiv regions.

On Monday, 100,000 high-precision DialPlexQ™ test systems purchased by the Foundation arrived in Ukraine from South Korea. They allow real-time PCR (polymerase chain reaction) to detect the infection. These systems have a European compliance certificate and allow diagnostication of the disease with accuracy of 99%.

Vadym Novynskyi's International Charitable Foundation in Honour of Intercession of the Most Holy Mother of God was founded in September 2008 to implement charity initiatives of Smart-Holding, whose main shareholder is Vadym Novynskyi. The Foundation provides charitable support aimed at bringing up the future generation on the principles of the Orthodox faith, at strengthening the role of family and promoting family values in society. The Foundation supports projects in the areas of spiritual outreach, education, healthcare, culture, art and sports. The mission of the Foundation is to contribute to the prosperity of society by developing its culture and spirituality on many dimensions based on the principles of the Orthodox faith.