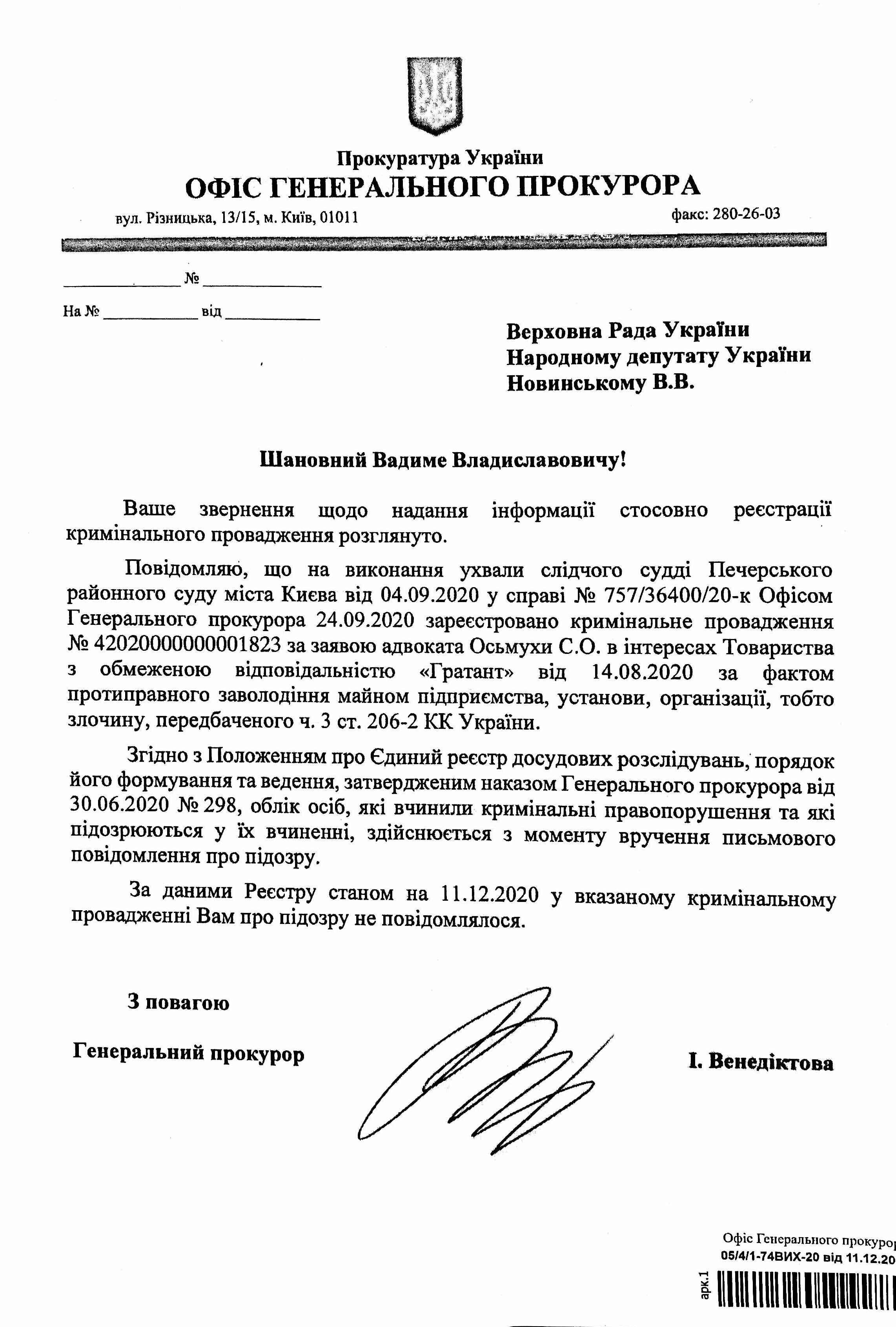 Yesterday, some media outlets released information about “the opening of a case against people's deputy (MP) Novynskyi", referring to RBC-Ukraine as the information source.

Today, the Office of the Prosecutor General gave its official clarification according to which Vadym Novynskyi is not “a person who committed a criminal offense or is suspected of committing it” in the criminal proceedings mentioned in the RBC publication. The requested response from the director of the Kyiv-based Territorial Administration of the State Bureau of Investigations (SBI) contains similar information.

According to the Unified Register of Pre-trial Investigations, Vadym Novynskyi has not been served with any notice of charges under the said proceedings.

All related news
Other news
Religion
Memorial Day of the Holy Equal-to-the-Apostles Prince Volodymyr and the Day of the Baptism of Rus
Today the Orthodox Church celebrates the Day of Remembrance of the Holy Equal-to-the-Apostles Prince Volodymyr and the Day of the Baptism of Rus.
Religion
Next 10 ambulances from Novynskyi Foundation to Kharkiv
Metropolitan Onuphrius of Kharkiv and Bogoduhiv, on behalf of the UOC on the territory of the Holy Intercession Monastery, handed over 10 ambulances, which were purchased in European Union countries by Vadym Novynskyi Foundation, to the mayor of Kharkiv, ...
Charity
Vadym Novynsky Foundation provided assistance to Zaporizhia hospitals in the amount of 15.1 million hryvnias
The executive committee of the city council of Zaporizhia appealed to Vadym Novynskyi Foundation with a request for external fixation devices as charitable aid.
Congratulations
Metallurgists and miners` day
...
Politics
Vadym Novynskyi resigned as a deputy
I have decided to resign as a People's Deputy of Ukraine and focus on humanitarian projects, on developming the national economy, serving the Ukrainian Orthodox Church and restoring destroyed churches.
Charity
Ukrainian Orthodox Church and Vadym Novynskyi Foundation donated 5 ambulances to Mykolaiv community
Metropolitan of Mykolayiv and Ochakiv Pitirim on behalf of the UOC handed over to Mykolaiv 5 ambulances that were purchased in Europe by Vadym Novynskyi Foundation.
Religion
Remembrance Day of Venerable Onuphrius the Great
On 25 June, the Orthodox Church honoured the memory of Saint Onuphrius the Great.
Charity
Another batch of ambulances from Europe - 16 cars
This week, Vadym Novynskyi Charitable Foundation delivered another consignment of ambulances from Europe to Ukraine. This time 16 Mercedes Benz, Renault, Opel and Volkswagen cars crossed the border.
Religion
Happy Holy Trinity!
Today we celebrate Pentecost (Trinity Sunday or the Trinity, as we usually call it) that is one of the main Christian holidays.
Subscribe to news