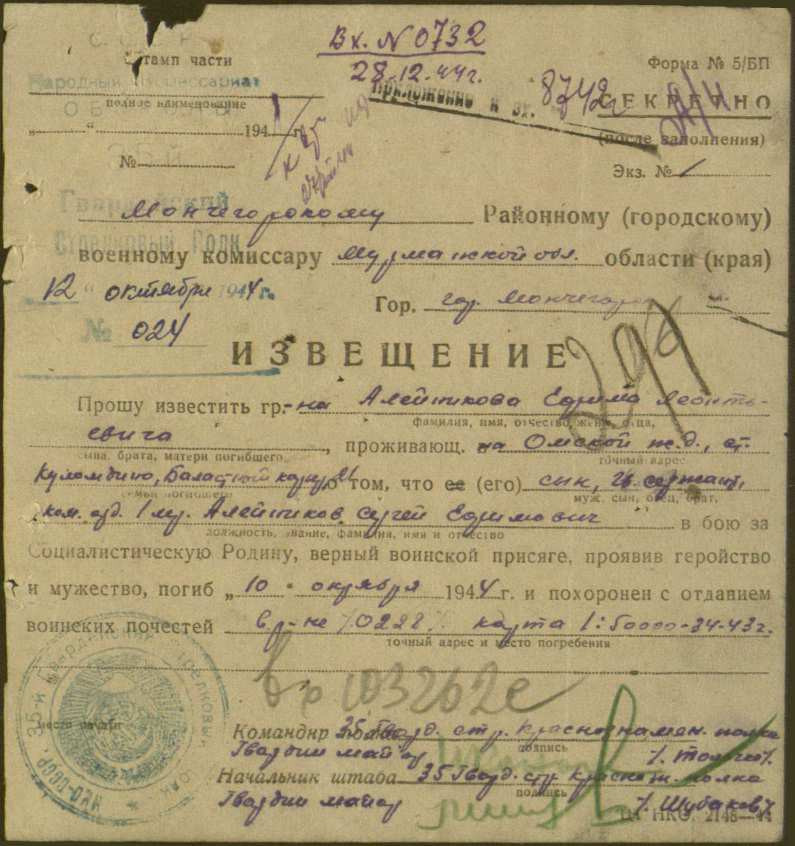 Tomorrow is the anniversary of Our Great Victory. Many good, kind and exalted words will be said. For some people, it is a day of celebration, with feelings of excitement and commemorated with “the commissar’s ration,” the soldiers 100 grams of vodka. However, a lot of criticism will also be levelled at our holiday. It is a day when some people will pour scorn and hatred onto everything honourable associated with the Victory.

All this will be seen tomorrow.

However, today is time to remember all those who passed through the crucible of that terrible war. The bitter fate of losing the loved ones befell my family like millions of other Soviet families. Our friends and relatives were among those who lived in the blockade, worked in the rear and were evacuated. And soldiers fighting at the front whose role is special. Two members of my family were among them.

My grandfather, Sergey Aleynikov, volunteered to go to the front in the early days of the war. The lead character in a remarkable Russian-Ukrainian movie, "The Battle of Sevastopol" said: "War is not only death; it is also a kind of life". My grandfather lived this life in the war. As a twenty-three-year-old private, a young lad from a small Karelian village, he first encountered the war in the Arctic in 1941. Three years later, in October 1944, he laid down his life there, having been promoted to the rank of a sergeant in the Guard. In 1942, he received a medal for bravery. He was a squad commander and a mortar detachment commander of the 35th Guards Rifle Regiment of the 10th Guards Rifle Pechengskii - Twice Order of the Red Banner, the Order of Alexander Nevsky, and the Order of the Red Star Division. It was a legendary division that did not let the fascists reach the Arctic Circle, and that took part in the first echelon of the Petsamo–Kirkenes Offensive in 1944. This offensive operation became the last for my grandfather as he died on 10 October 1944.

My mother's uncle, Aleksandr Kotov, was a handsome man well-loved by the whole family. He served in the Baltic Fleet, on a patrol boat, and then as part of the Marine Corps. He lost his life in the summer of 1942. Officially, he went missing during an amphibious assault on the Sommers Island which was being guarded by Finnish gunboats and German minesweepers. In reality, more than two hundred of our marines and sailors, completely cut off on a rocky patch of 400 to 200 meters, were under constant enemy fire from land and naval artillery. They fought to the last man down, over three days, before finally succumbing to superior enemy forces.

These are the stories of my family.

To quote the writer Nikolai Tikhonov:

"Could nails from such people be fashioned, you'd see
that no tougher nails in the world would there be".