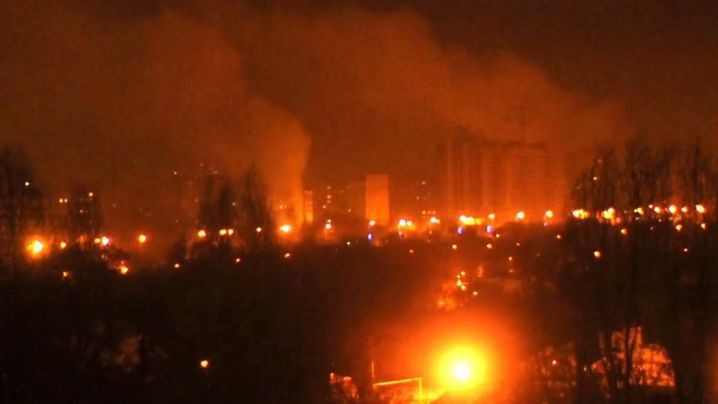 Unfortunately, the "Avdeevka crisis" continued yesterday. It continued in spite of the agreements and guarantees of a cease-fire. The agreements were broken. They were broken by both parties: Avdeevka, Donetsk and Makeevka all suffered from severe shelling where volley fire systems, large-caliber artillery and tanks prohibited by the Minsk Agreements were used. Yesterday, people were killed again. A lot of people. On both sides of the demarcation line, Ukrainian civilians died, houses, schools and medical facilities were left in ruins. There is a simple explanation for this nightmare – for many of those responsible for decision-making, this war is more profitable than peace. And such people are from both sides.

Tens of thousands of heavily armed people stand against each other and it is unrealistic to guarantee that any, even minor, confrontation will not grow into another full-scale escalation.

There is nothing to prevent the Ukrainian Parliament from voting for the entire political portion of the Minsk Agreements, including constitutional reform; from voting even with a delayed implementation date. By doing so they will demonstrate a real intention, and commitment, to settle the conflict through peaceful methods, rather than a desire to wait for an illusive opportunity to implement the "Croatian scenario".

We, the Opposition, submitted all the necessary legislative initiatives to the Parliament. They just need to be discussed, brought to the debating chamber and voted for. After that, we need to sit down together and determine how to ensure implementation of all the Minsk procedures as well as their transparency. If this Parliament is not ready to implement the agreements, if saving of the coalition and its narrow electoral interests are more important than human lives, this Parliament should be dissolved and this government should be changed.

At the same time, all those politicians who call for Ukraine's withdrawal from the Minsk process, all those who attempt to sabotage it, should be sanctioned as opponents of a peaceful settlement and representatives of the "Party of War".

Finally, if our team in the trilateral negotiation group is not able to find a compromise and to negotiate, then we need to replace some, or all, of its members, and find skilled negotiators.

Obviously, the President must play a key role in all these matters: in fact, play the key role and take primary responsibility. I want to remind Mr Poroshenko that almost three years ago he promised to end the war in two weeks, and that is why he received unprecedented support at the time. Almost three years have passed and people are still dying in Donbass.

Petro Poroshenko, keep your promise, and stop the war! This is entirely within your power. Demonstrate your political will. Right now everything needs to be done to stop the shelling and return to the question of immediate disengagement of the parties. It`s time to walk the talk.

All related news
Other news
Religion
Memorial Day of the Holy Equal-to-the-Apostles Prince Volodymyr and the Day of the Baptism of Rus
Today the Orthodox Church celebrates the Day of Remembrance of the Holy Equal-to-the-Apostles Prince Volodymyr and the Day of the Baptism of Rus.
Religion
Next 10 ambulances from Novynskyi Foundation to Kharkiv
Metropolitan Onuphrius of Kharkiv and Bogoduhiv, on behalf of the UOC on the territory of the Holy Intercession Monastery, handed over 10 ambulances, which were purchased in European Union countries by Vadym Novynskyi Foundation, to the mayor of Kharkiv, ...
Charity
Vadym Novynsky Foundation provided assistance to Zaporizhia hospitals in the amount of 15.1 million hryvnias
The executive committee of the city council of Zaporizhia appealed to Vadym Novynskyi Foundation with a request for external fixation devices as charitable aid.
Congratulations
Metallurgists and miners` day
...
Politics
Vadym Novynskyi resigned as a deputy
I have decided to resign as a People's Deputy of Ukraine and focus on humanitarian projects, on developming the national economy, serving the Ukrainian Orthodox Church and restoring destroyed churches.
Charity
Ukrainian Orthodox Church and Vadym Novynskyi Foundation donated 5 ambulances to Mykolaiv community
Metropolitan of Mykolayiv and Ochakiv Pitirim on behalf of the UOC handed over to Mykolaiv 5 ambulances that were purchased in Europe by Vadym Novynskyi Foundation.
Religion
Remembrance Day of Venerable Onuphrius the Great
On 25 June, the Orthodox Church honoured the memory of Saint Onuphrius the Great.
Charity
Another batch of ambulances from Europe - 16 cars
This week, Vadym Novynskyi Charitable Foundation delivered another consignment of ambulances from Europe to Ukraine. This time 16 Mercedes Benz, Renault, Opel and Volkswagen cars crossed the border.
Religion
Happy Holy Trinity!
Today we celebrate Pentecost (Trinity Sunday or the Trinity, as we usually call it) that is one of the main Christian holidays.
Subscribe to news