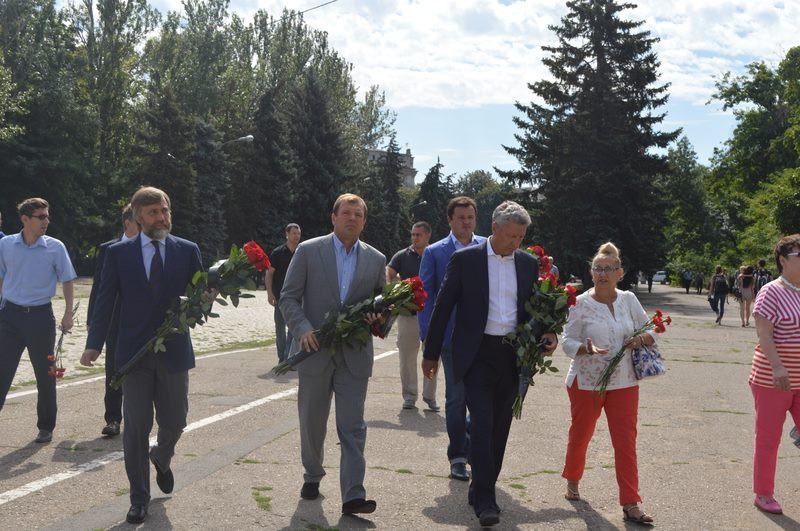 Today Vadym Novynskyi, Yurii Boiko and Mykola Skoryk laid flowers outside Odessa’s Trade Union Building to remember the tragedy of May 2nd 2014, completing what they were prevented from doing on the anniversary of the ‘Odessa Khatyn’.

They talked to some of the bereaved families and told them that two sets of documents had been filed at the International Criminal Court in The Hague and the European Court of Human Rights in Strasbourg. These documents provide evidence of the Ukrainian government’s failure to make a prompt and impartial investigation into the events of May 2.

Vadym Novynskyi commented: “The entire country can testify to the fact that the Ukrainian law enforcement agencies are not conducting an impartial investigation into the Odessa tragedy. We believe that it is right to draw international attention to the investigation into the events of May 2 and appeal to international legal institutions to intervene in the investigation. Therefore, not only have we submitted documents to the Prosecutor at the International Criminal Court in The Hague and filed a complaint at the European Court of Human Rights in Strasbourg but we also reserve the right to apply to other international organisations, including the United Nations. This is to ensure that the perpetrators of May’s tragedy do not go unpunished.

I believe that the findings of an impartial investigation may shock the country as, in our opinion, the people responsible for the ‘Odessa Khatyn’ still hold key positions in the Ukrainian Government. Experience has shown that the European and International Courts investigate crimes of such a magnitude promptly and objectively. Therefore, I am sure that the perpetrators of this terrible crime will receive the punishment they deserve”.