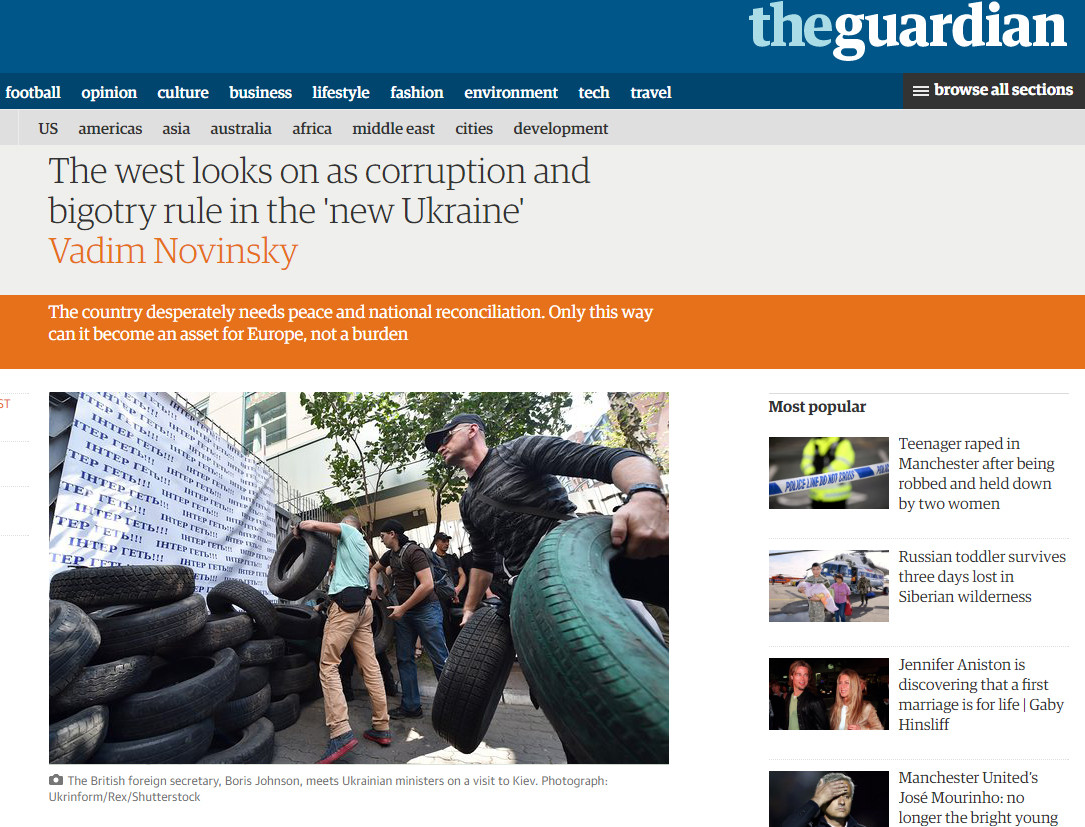 The country desperately needs peace and national reconciliation. Only this way can it become an asset for Europe, not a burden


Two years ago, the west looked at Ukraine with enthusiasm. These days, the sentiments are closer to despair and fatigue.

My country has not had the European breakthrough that was promised. Those who came to power in Kiev to the applause of western elites now hope that their international partners will turn a blind eye to the way they run the country.

And that’s not what ordinary Ukrainians need. In early September, dressed in military uniform, about 20 young nationalists launched an attack in Kiev against an independent TV channel, setting tyres ablaze and throwing a smoke bomb into the building, causing a fire that damaged the first and second floor. One journalist was seriously injured.

Those who organised this act of terror remain unpunished. Law enforcement agencies and other government bodies have ignored calls from EU institutions, politicians and human rights groups to carry out a comprehensive and unbiased investigation.

After the TV station attack, a man accused of organising the crime boasted about it and threatened another channel, but police say they cannot identify any suspects.

What kind of justice can be expected if just before the attack, MPs from Ukraine’s ruling coalition called for the TV channel to be punished for its allegedly “unpatriotic” editorial policy?

This is how impunity for bigots paves the way for more violence.

Ukraine’s government relies heavily on continuing western support to stabilise the withering economy and assist the country in its confrontation with Russia.

To secure this, the Ukrainian president, Petro Poroshenko, consistently boasts of his unequivocal devotion to European democratic values and the rule of law. What’s actually going on in the country makes those affirmations meaningless.

The economy is stagnating. Utility tariffs are going up, well beyond minimum salary levels. Social unrest has become more and more likely, leading to an increasingly bold witch-hunt by the government against opposition voices.

I have first-hand experience of this.

In July, a religious procession was organised by the Ukrainian Orthodox church to commemorate the anniversary of the christening of Kievan Rus’, while calling for a peaceful resolution to the conflict in eastern Ukraine.

It ended up as a mass event, with more than 100,000 participants nationwide, and as an Orthodox believer and a staunch supporter of a non-violent end to the Donbass conflict, I endorsed the procession and offered financial assistance to its leaders, as well as supplying food and water to the participants.

The backlash against me was almost immediate. On the day of the procession, Ukraine’s security service searched the office of my company, Smart Holding. I’m now being threatened with criminal prosecution under a false pretext.

The authorities were clearly rattled by the scale of public resentment towards their policies. The unresolved conflict in Donbass, increased deprivation, long-brewing social divisions ... all [of these] are creating a dangerous cocktail.

It’s high time the friends of Ukraine in the west disavow their support for those in the Ukrainian government who promote bigotry, intolerance and warmongering.

Ukraine desperately needs peace with its neighbours. The country requires national reconciliation. It has to respect the legitimate rights of the opposition. Only with these basic goals achieved can we embark on the challenging mission to reconstruct our country so that it becomes an asset for Europe, not a burden and a headache.

Vadim Novinsky is a Ukrainian MP for the Opposition Bloc