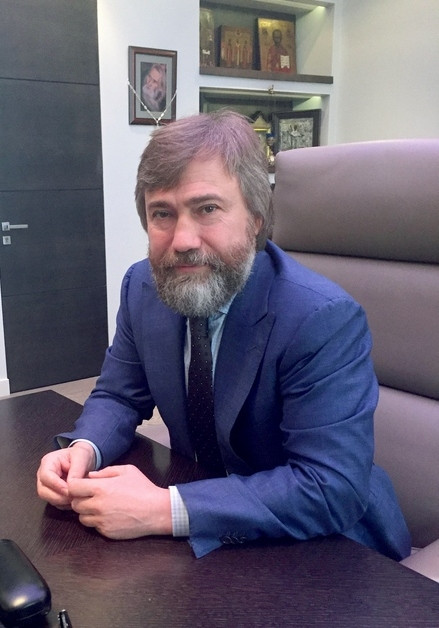 
Today, we interviewed one of the most private of the People’s Deputies, Vadym Novynskyi. He interests journalists and commentators alike because of his influence on the political processes in Ukraine and, in particular, his active role in opposition.

— What did the Opposition Bloc do today? How do you explain the fact that the entire “Opposition Bloc” (along with the government coalition) voted for the amendments to the Constitution of Ukraine? This vote had already taken place in February, after the resignation of (former) Prime Minster, Arsenii Yatsenyuk.

— Well, there are some issues, on which our position and that of the government converge. For instance, we agree on the need to amend Ukraine’s legal system. Our team had already tried to execute full-scale reform of the judiciary system in 2013. We succeeded in ratifying the Code of Criminal Procedure (CPC) and introducing a new law regarding the Prosecutor’s Office. When it came to changes in the system of judicial authority political parties, which were in opposition at the time, began to actively criticise all our attempts at conducting reforms. In the Parliament, elected in 2012, we failed to collect the 300 votes that were necessary to carry the amendments to the Constitution. Now, over two years later, we shall try to complete the reforms that we started in 2013. They told us that we could not make amendments to the Constitution regarding the expansion of the power of the authorities, and the unique status of individual regions, because article 157 of the Constitution prohibited making changes in times of war or during a state of emergency. Now we have precedent as alterations to the Constitution have been made by Parliament so deputies should be able to make additional amendments. There are no longer any obstacles to prevent us considering the important issue of the Minsk Agreements. From these, peace in Donbass will be restored.

—Do you understand that the consideration of Donbass’ special status causes deep divisions in the Parliamentary Chamber?

— Of course, I understand that. The Ukrainian authorities have found themselves in a no-win situation. If they accept amendments to the Constitution, it will lead to protests by radicals. If they reject the changes, there will be a strong reaction from our partners both at home and abroad, because of the non-fulfilment of the conditions of Minsk Agreements. We have to choose, but I hope common sense will prevail.

— For a long time there have been rumours that the “Opposition bloc” is near collapse, and new political parties will emerge to replace it. At a recent convention it was obvious that the rumours of its demise were exaggerated. However, there are now two co-chairmen, two executive officers, and two chairmen in the party. Does the internal division still exist?

— I would not call it a division. Two factions, similar in terms of strategic aims, have always existed in the “Opposition Bloc”. The difference relates to our strategic vision. However, as both time and experience have shown, this had led to a useful discussion. At the convention, Boris Kolesnikov and Yurii Boiko moderated the development of our strategic vision. The bipartite structure of the party administration was introduced to prevent misunderstandings, and was agreed by all the members of the party, as well as the leadership.

— What is your role in the party?

— Is it similar to the Politburo in the Central Committee of the Communist Party of the Soviet Union?

— I would rather not draw such parallels. The deceased Viktor Stepanovich Chernomyrdin, for whom I have the deepest respect, once said the phrase, which became an aphorism: “Whenever a new political party is started, whatever its political orientation, it ends up as the Communist Party of the Soviet Union (CPSU)”. Consequently, we decided to set up a “non-CPSU”. We have no chiefs. We have leaders. We could describe both leaders - Yurii Boiko and Boris Kolesnikov - with the Latin expression “primus inter pares” meaning “the first among equals”. The other party members, including myself, Sergei Levochkin and Aleksandr Vilkul totally accepted this administrative structure. The main purpose of the convention is to begin uniting the different oppositional forces including political parties, public organizations and trade unions. The sociologists tell us that the Opposition is doing well, it has increased ratings, and today it vies for first place with Yulia Tymoshenko’s “Batkivshchyna” Party. However, if today we are interested in raising the level of public support, not from 10% to 15%, but from 15% to 20%, this is misguided. Let’s imagine that elections are held tomorrow and the Opposition Bloc receive 25% of the votes. Will that satisfy us? Not at all! The number of mandates we would receive would increase from 42 to 120—130. However, we would still be in the minority, i.e. in opposition. We, as a party, need a result that will give us power. We may be able to harness the protest votes as there is a groundswell of opposition to the government’s destructive course. Our task is to get these protest votes. We have a lot of groundwork to do in order to mobilise and unite these voters.

— You have had, to put it mildly, strained relations with Piotr Poroshenko. Are they on-going?

— These are business and official relations. Are you interested if we communicate? Yes, we do although I don’t share his position on many issues. However, if the issue concerns, for instance, the protection of the Ukrainian Orthodox Church (UOC), I appeal to him as to the guarantor of the Constitution and constitutional rights of the Faithful. He can use his authority to ensure the freedom of conscience and the freedom of religion. To give him (Piotr Poroshenko) credit, he never refuses to listen to the UOC position. Radicalism and emotionality, especially when it comes to faith, are always subservient to politics. Today, in the Ternopil region of Western Ukraine, the Deputies are voting on whether to take the Pochaev Lavra away from the Faithful. However, this is an abuse of power by a devolved body. Although it should intervene, the Prosecutor’s office remains silent and the Deputies attempt to pass a discriminatory law in relation to UOC! Where is our Constitutional Court? Some, not all, elements of the mass media have added fuel to this fire.

I am trying to deliver several messages to the current government. The first message is that those bodies that execute the power in the state by their actions against the Church only encourage the resistance of the people. The second is that dissenters will not become more canonical as a result of the ban of the canonical Orthodox Church – God’s Grace is not granted by Presidential decree and the resolution of Verkhovna Rada. The third point is that similar actions will only lead to the widening influence of different sections of the community, including totalitarian groups who represent a real threat to the state. I want to believe that these messages will be heard.

— You are a man, who came to politics from business. Despite rumours, you haven’t fled the country. Are you optimistic about the future of Ukraine?

— Why should I leave? The fact that the authorities have attempted to force me out of Ukraine, deprive me of my Ukrainian citizenship (which is against the Constitution), and made serious allegations against me, show that I am the victim of political intrigue. Despite rumours in the press, I don’t have dual citizenship. I am a citizen and patriot of Ukraine. However, my patriotism is different from the “supposed” patriotism of some of my colleagues in Ukrainian politics. I think the future of Ukraine lies in restoring cooperation with our traditional partners in the East, in the renewal of dialogue with Russia (and not only with Russia), and in the search for new markets beyond the boundaries of Europe. I believe Ukraine has a bright future, once the revolutionary waves have calmed down. The companies with which I was associated before I was elected as a People’s Deputy have begun, albeit cautiously, to recover from the crisis. This gives me hope. If we can put the upheaval behind us, stability, peace and order will return to Ukraine. These in turn will provide the necessary conditions for the development and modernization of our country.