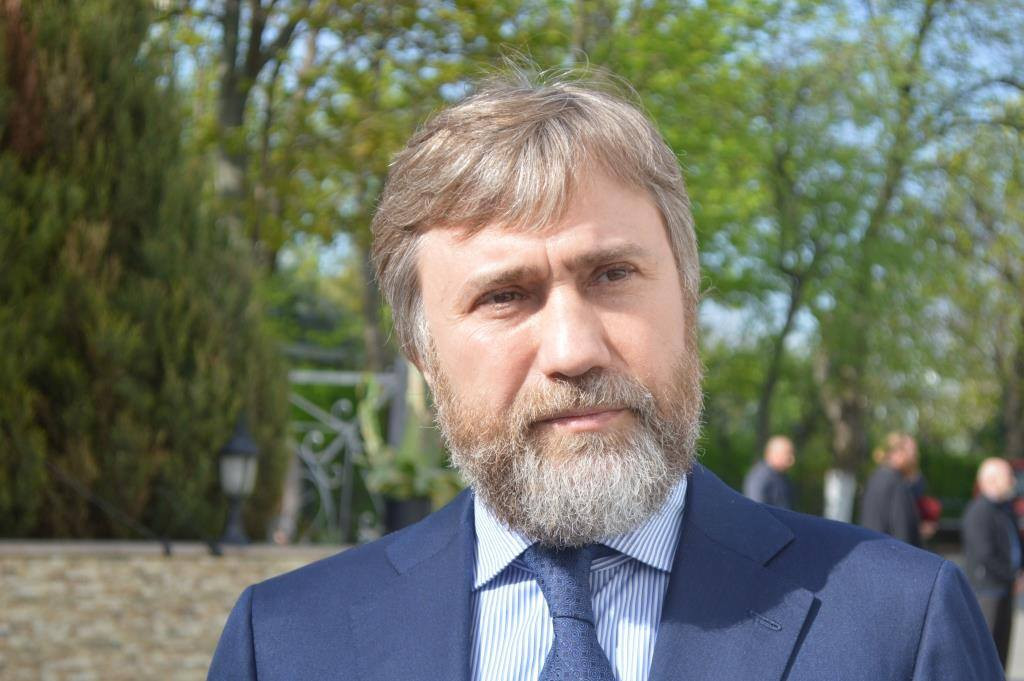 MP Vadym Novynskyi’s thoughts on the need for a new "roadmap" for the country and telling historical lessons.

Political disputes over Ukraine's fulfilment of its obligations under the Minsk Agreements are facing a number of insurmountable arguments. However, any sociology shows that the overwhelming majority of citizens of Ukraine express the desire for peace and understand the non-alternative nature of the Minsk Agreements.

Ukraine has got tired of the war. For the fourth year people are dying, victims number in tens of thousands, the economy has been put on a war footing, propaganda is imbued with the spirit of militarism and soldiery. It is worth admitting fairly that the Minsk Agreements themselves are not so much a panacea, but rather a temporary anaesthetic. The Dayton Agreements of 1995, which the Minsk Agreements are often (and quite rightly!) compared with, resolved the problem of the acute phase of the conflict between Serbs and Muslims in Bosnia and Herzegovina. However, they put the country in full dependence on European monitoring and virtually gave it to external administration. The cumbersomeness of Bosnia’s state system, the de facto confederative nature of the state, special delimitating territories create pre-requisites for further conflict situations.

That is why the process of peaceful settlement in Ukraine should not be limited solely to documents developed in Minsk. Steinmeier formula or Macron formula are half-way solutions: Europe needs that shooting is stopped in the East of Ukraine, Ukraine regains control over its eastern borders, self-proclaimed republics return to Ukraine in this or that way, and Europe unleashes its hands for full-fledged trade with Russia.

Does this solve the problems of Ukrainian society? Obviously not. First, today Ukraine needs to begin a discussion about a more capacious formula of peace, which would encompass the issue of co-existence of citizens within a single state. The war, apart from victims and destruction, also brings a huge distrust between the warring parties. One should not think that the formal ending of the acute phase of the conflict in Donbass would lead to universal rejoicing. There is still a serious work ahead to restore not only the economy of the East of Ukraine, but also trust between people.

Ukraine has its own sad post-war experience. After the Second World War, the Soviet Union took a number of measures aimed at "appeasing" the population of Western Ukraine. In addition to six waves of amnesty for the UPA participants (judging by the documents, the Soviet authorities really observed all the terms of the amnesty), huge funds were invested in the construction of industrial and infrastructure facilities, modernization of the economy, cultural and educational programs. Many residents of rural areas moved to cities. It was believed that this would eliminate the basis for nationalistic sentiments. After 30 years, Galicia became a stronghold of anti-Soviet, and in another 20 years – anti-Russian moods. The memory of the deceased relatives and those exiled to Siberia proved to be stronger than the programs that provided for stable social and economic development in the region. Will not we encounter a similar picture in Donbass?

That is why the formula for sustainable peace in Ukraine should first foresee the achievement of a political and civil compromise between the East and the West. The result should be the new Constitution of Ukraine, which, while preserving the unitary nature of the country, should expand the powers of all regions without exception and reduce the role of the Centre (by the way, the draft of the Constitution was developed by the opposition two years ago).

Now about the second important package of questions. The Minsk Agreements do not address the issue of the Crimea. Yet, without resolving this issue, there will be no complete resolution of the conflict with Russia. When somebody attempts to ask me the question "Whose is Crimea?” I answer "Read the Constitution. It clearly defines the issue of ownership for the Crimea and Sevastopol. There is the international law. There is recognition of Ukraine within its legal borders. Therefore, the question itself is not appropriate."

However, it is necessary to answer the question: what compromise with Russia can Ukraine go to in matters of sovereignty over the Crimea? The proposed concepts (Hong Kong option, long lease, Northern Ireland option of the Good Friday Agreement, the Argentinean and British post-Falkland option and others) cause lots of objections and comments. Once Pope Pius IX said that a politician who could offer a compromise between the Roman Catholic Church and the state of Italy would become the greatest Italian politician. Ironically, Benito Mussolini became such a politician. Rephrasing it, one can say that the greatest Ukrainian politician will be the one who will be able to offer a real and feasible plan for reaching a compromise over the Crimea.

Today, the canals supplying water to the northern regions of the Crimea are closed. Power transmission lines are destroyed. Citizens with a residence registration in the Crimea are deprived of some of the rights enjoyed by other citizens of Ukraine (this, for example, concerns the banking sector). Imagine that in a year or two the international arbitration will decide that it is necessary to hold a referendum in the Crimea under the auspices of the UN, OSCE and other international organizations, including admission of Ukrainian observers. What will be the results of the referendum? It is necessary to change Ukraine's policy in relation to the Crimea. Proposals from Ukrainian politicians are as follows: a. to wait until Putin leaves; b. to wait until the disintegration of Russia begins; c. to wait until the US declares war on Russia – and this is nothing more than a sign of political infantilism.

Peace in Ukraine cannot be final until a new system of collective security is created on a global scale. The events in Donbass and the Crimea (as well as in Kosovo, Abkhazia and South Ossetia) showed that the world order established after the Second World War and enshrined in the Final Act of the Helsinki Conference on Cooperation and Security in Europe has experienced a crisis. The principle of inviolability of borders in Europe does not work. Today, it is necessary to come forward with an initiative of a new Helsinki process, which can improve the previous principles. For example, the OSCE has virtually no means of forcing aggressors to peace. Ukraine (along with Serbia and Georgia) has every reason to initiate such a conference. It is necessary to draw up a new "roadmap" to achieve peace in Ukraine, in which the settlement of the Donbass issue will become only one of the elements, the first, but by far not the final part of the plan.

In search of a formula for peace, one cannot ignore the factor of Ukrainian canonical Orthodoxy, which can become a platform for a peaceful dialogue. It is the Ukrainian Orthodox Church (UOC) that works in the territory not controlled by Kiev. The UOC in the Crimea is in canonical subordination to Kiev. The authority of the Church remains unshakably high, which is confirmed by all sociological surveys. This factor needs to be used. An example, when the personal petition from His Beatitude Onufry, the Primate of the UOC, helped liberate the so-called "cyborg" soldier Taras Kolodiy from the captivity last December, is indicative: the institution of the Church can actively contribute to the solution of many important issues.

The fact that on July 27 about one hundred thousand parishioners of the UOC came out for the sacred procession and demonstrated their faithfulness to the ideals of peace, showed that this resource cannot be ignored, much less destroyed. By the way, the authors of the draft laws aimed at limiting the influence of and destroying the canonical Orthodoxy in Ukraine are the most ardent representatives of the "war party", those who zealously stir up strife, "renouncement of the Minsk Agreements", etc.

I believe that Ukraine will achieve a long-awaited peace. Yet, this peace must encompass all spheres of public life. Peace should become an internal need for all citizens of Ukraine – and a conscious need. Peace cannot be peace at any cost – and therefore it is necessary to set the limit of reasonable compromises for oneself. In one word, it is time not just to talk about peace, but also to act. I believe in the triumph of reason over militant madness – after all, reason always wins.

All related news
Other news
Religion
Nativity of Virgin Mary
Today the Orthodox Church Celebrates the Nativity of Our Most Holy Lady Theotokos and Ever-Virgin Mary.
Religion
The church new year
On September 14, Orthodox Christians celebrate the church new year.
Religion
Day of the Beheading of Saint John the Baptist
Today we remember a great and righteous man and a Prophet, a saint most revered by our Church – John the Baptist and Forerunner of the Lord.
Growth of Ukraine
“Metinvest Together! psychological service” helps over 1,100 employees
Metinvest Together! psychological service was launched as a response to life challenges, to help the company’s employees during the war. The project is a success, judging by 1,113 individual and group support sessions as well as a number of positive ...
Growth of Ukraine
"Metinvest" once again confirms the fulfillment of its debt obligations, having paid the coupon for Eurobonds-2027
Metinvest B.V. (Netherlands) reaffirms the continued fulfillment of its debt obligations, in particular to bondholders, despite the war in Ukraine.
Growth of Ukraine
Speech by CEO "Smart Holding" at the economic forum in the Polish city of Karpach
"The beneficiary of the Marshall Plan is not only Ukraine. This is the Plan for the Reformation of Europe" — the speech of the CEO of "Smart Holding" at the economic forum in the Polish city of Karpacz
Growth of Ukraine
Smart Energy Group paid 1.84 bln UAH in taxes in the first half of 2022
In the first half of the current year, the companies of Smart Energy Group paid a total of 1.84 bln UAH in taxes to the budgets of all levels, including 772.4 mln UAH of rent payments for the subsoil use.
Religion
The Dormition of the Most Holy Theotokos
I heartily congratulate you on the Great Feast — the Dormition of the Most Holy Theotokos, the Passover of the Mother of God.
Religion
55th birth anniversary of Metropolitan Anthony of Boryspil and Brovary
Today, Metropolitan of Boryspil and Brovary Anthony (Pakanich), Director of Affairs of the Ukrainian Orthodox Church, is celebrating his 55th birthday.
Subscribe to news