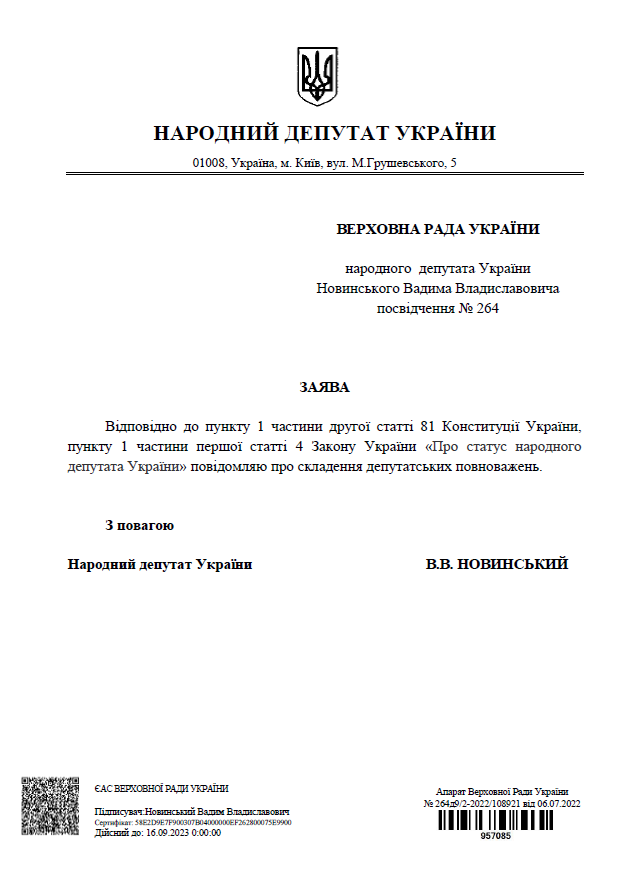 In 2019, I was trusted by the voters of the city of Mariupol, whose interests I have represented in Verkhovna Rada of Ukraine for the last 3 years.

It was a fruitful time of cooperation. Together with the city authorities of Mariupol, we have implemented many projects that required legislative support and well-coordinated interaction with the government.

And we did it. Mariupol became one of the centers of growth in Ukraine, an example of self-government, and a city with a high standard of living. It was a real example of what the whole peaceful Donbass could become. If not for the war...

Much of what was done was destroyed by the war. A significant part of my voters were forced to leave their hometown.

Throughout this time, I have been and am now dealing with the problems of citizens affected by hostilities - and not only Mariupol residents. The Foundation in Honor of the Intercession of the Most Holy Mother of God, initiated by me, has been sending humanitarian aid and medicines to Mariupol and other settlements of Ukraine. In this matter, we are acting together with the Ukrainian Orthodox Church, which has always been with its people and its flock in the days of the most difficult trials. And now we are providing and will continue to provide all possible assistance to Ukrainians who find themselves in the position of forced refugees and migrants.

In the new dramatic circumstances that have arisen after the occupation of Mariupol, I believe that I will be more effective not in politics, but in humanitarian, social, production and economic activities. To be honest, there is no time for politics now - the time and circumstances dictate other priorities.

I have decided to resign as a People's Deputy of Ukraine and focus on humanitarian projects, on developming the national economy, serving the Ukrainian Orthodox Church and restoring destroyed churches.

I will pay special attention to projects for the post-war economic revival of Ukraine as an industrial, high-tech and highly educated country.

I am sure that in this practical work I can be more useful for Ukraine as a whole and for the people who supported me in 2019.

Today, being scattered over Ukraine and the world, they – for sure! – expect from me concrete and practical assistance, rather than legislative initiatives.

My team is already working to provide settlements of Ukraine with ambulances, medicines, and food. Ahead is implementation of programs for the post-war revival of Ukraine and its economy, the restoration of factories and infrastructure, new projects that will provide people with new jobs.

I am sure that my voters will be sympathetic to my decision. After the war, I will help the revival of Mariupol, the city that has become my home, with all my might and to the best of my ability.

With sincere gratitude to my voters and with respect to my colleagues in Verkhovna Rada of Ukraine, - Vadym Novynskyi.