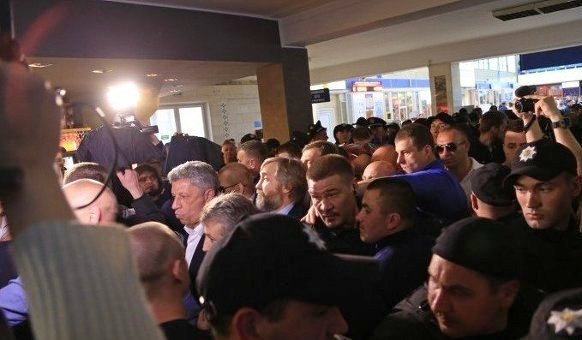 Representatives of ‘Svoboda’ and ‘AutoMaidan’ have prevented Vadym Novynskyi and Yurii Boiko, Deputies (MPs) from the Opposition Bloc, from leaving the terminal at Odessa Airport. The aim of these protestors was to prevent the Opposition delegation from attending a service commemorating the 48 people who died, and 247 people injured, during the 2014 clashes in Odessa. These clashes erupted late in the afternoon of May 2nd between nationalists, FC “Chornomorets” and FC “Metalist” fans on the one hand, and Odessa residents – the AutoMaidan supporters – on the other. Later, dozens more people died from asphyxiation or injuries caused as a direct result of the fire at Odessa’s Trade Union Building, where the AutoMaidan supporters had been sheltering.

The Remembrance Service was due to be held in Odessa at 14:00 . Earlier in the day, there had been bomb threats at Kulykove Pole (where the AutoMaidan’s camp was situated in spring 2014), so the National Guard had cordoned off the area. At the airport, a mob prevented Boiko and Novynskyi from leaving the terminal building. The police did not intervene to assist the Deputies or control the protestors. Not wanting to escalate the situation, the Parliamentarians flew back to Kyiv.

Vadym Novynskyi made a statement on this issue: “It is no secret who was behind this. It is the government - the same government that has plunged 90% of Ukrainians into poverty. Panicing, it did not want to let us into Odessa. However, Odessans should not be deceived or intimidated. We are on their side: we are the only opposition party in the country that has consistently demanded a transparent investigation into the Odessa tragedy and the punishment of the perpetrators. However, the Government does not want this. We did not want a repeat of 2014’s events so we abandoned going to Kulykove Pole.”

Vadym Novynskyi also made a statement on a Ukrainian television channel, commenting on the blocking of Odessa Airport:

“Yurii Boiko (Head of the Opposition Bloc’s parliamentary faction), Yevhen Bakulin (Deputy from the Opposition Bloc), and I arrived in Odessa to attend a service for those who were killed on May 2, 2014. Afterwards, we were planning to lay flowers in Kulykove Pole and then fly back to Kyiv”.

Novynskyi said that people wearing balaclavas and camouflage prevented them from leaving the airport. He added, “All entrances and exits to the airport were completely blocked: there were several cordons”.

“We could have forced our way out of the airport, but we did not want any clashes that might result in bloodshed, particularly on the day when we were supposed to be remembering those who had already lost their lives. Therefore, we held the memorial service inside the terminal building itself.” Novynskyi went on to say, “In our country, the government is afraid of thugs, while thugs are not afraid of the government (as they should be in a normal state),” He promised that Opposition Deputies would appeal to law enforcement agencies to investigate the events at Odessa airport.