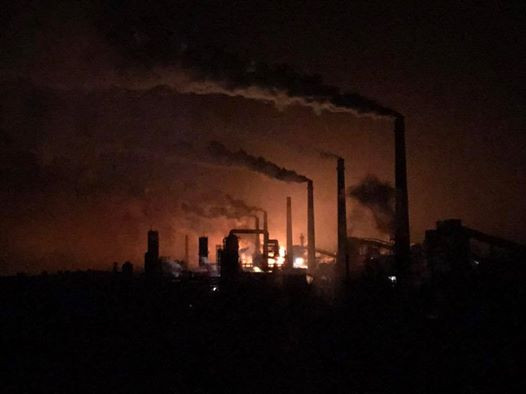 Avdeevka and Yasinovataya are towns from the Anti-Terrorist Operation area in eastern Ukraine where armed clashes have been taking place over the last few days.

There have been dozens of fatalities including peaceful civilians on both sides of the demarcation line. Who is right and who is wrong? Each party has their own vision of the truth but you will never get back the human lives that have been lost. People are not the only ones who are being killed. The infrastructure is being destroyed, the factories have been stopped or closed down. Avdeevka is facing a humanitarian disaster.

In these circumstances, the Avdeevka Coke Chemical Plant, having been left without sufficient electricity to run their furnaces or maintain production, decided to save the freezing city. The plant operated all night and heated the city until aid arrived.

CEO of the Plant, Magomedov, and his staff ensured that the city kept running. I believe that this shows true courage, dedication and care for the country and its people. This is an example of true patriotism, unlike the fake blockades and other provocations.

It is necessary to understand that the deteriorating situation around Avdeevka, which has brought new victims and hardship, illustrates the futility of the undeclared war in Donbass.

The Minsk Agreements, without which sustainable and stable peace is impossible, have been ignored and violated by both sides of the conflict. It is now too late to apportion blame. Today, Ukraine, Ukrainians and especially Donbass need peace.