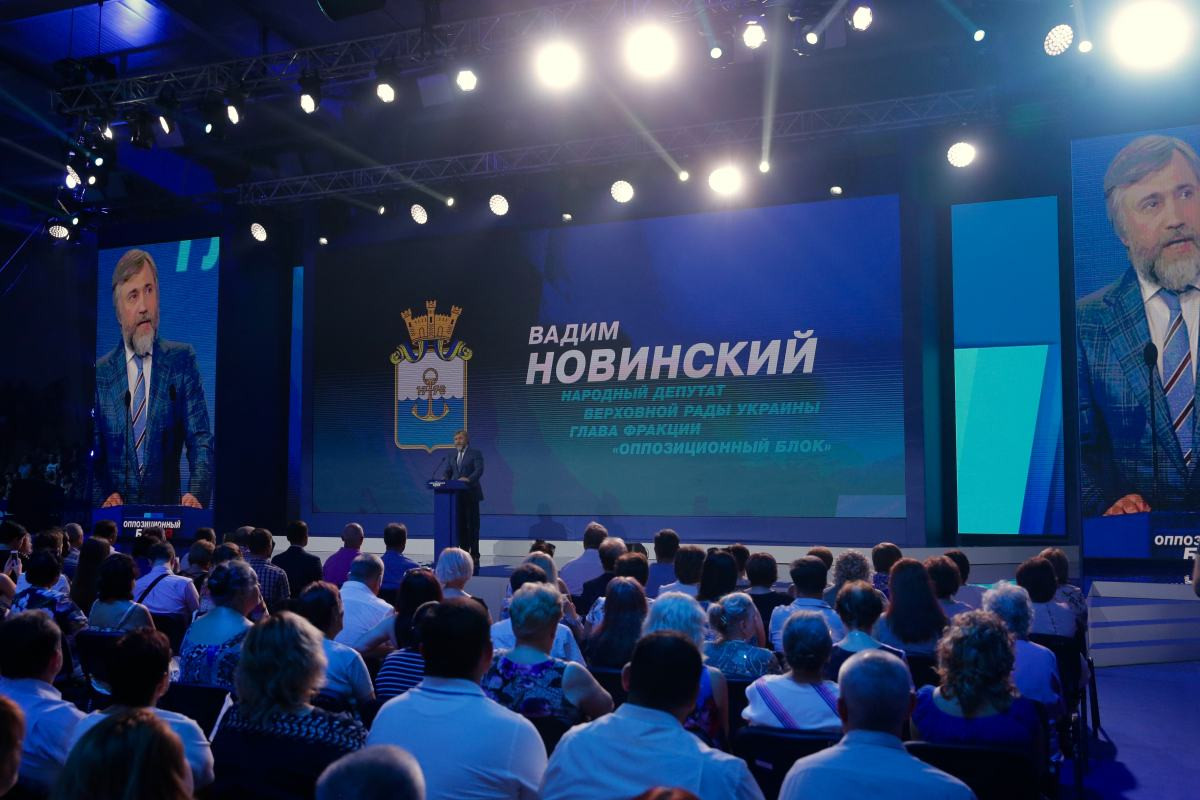 Politics
Politics
On 24 June, Mariupol hosted a large-scale forum “Together to Peace” organized by our team of the Opposition Bloc. The forum was attended by the mayor of Mariupol Vadym Boychenko, city council members, labour veterans, and active representatives of the city community supporting the Opposition Bloc’s program aimed at establishing peace and stable development of the city.

I addressed Mariupol residents with the key provisions of my electoral program, which were, are and will be our main goals: ending the war, establishing sustainable peace, economic revival, protecting the interests of working men and supporting canonical Orthodoxy. For five years, the previous authorities did everything to divide Ukraine and divide Ukrainians into the right and the wrong ones. Now it is time to unite it. We will start with Mariupol, the metallurgical capital of Ukraine.

Together with the team of the Opposition Bloc and the city mayor Vadym Boychenko, we want to make Mariupol a scientific and tourist centre, an environmentally friendly city where people would want to live, to work and develop. For quality growth, the city needs large infrastructure projects: the embankment, universities, parks and squares, schools and hospitals. That is why we are going to the elections with a united and powerful team and will represent the interests of Mariupol residents in the parliament.

Our task is to return to the city the money earned by Mariupol and to direct it to development, so that it is not Kyiv officials who are managing it, but the city authorities that you trust and that report to you.

Together to peace!
All related news
Other news
Religion
Memorial Day of the Holy Equal-to-the-Apostles Prince Volodymyr and the Day of the Baptism of Rus
Today the Orthodox Church celebrates the Day of Remembrance of the Holy Equal-to-the-Apostles Prince Volodymyr and the Day of the Baptism of Rus.
Religion
Next 10 ambulances from Novynskyi Foundation to Kharkiv
Metropolitan Onuphrius of Kharkiv and Bogoduhiv, on behalf of the UOC on the territory of the Holy Intercession Monastery, handed over 10 ambulances, which were purchased in European Union countries by Vadym Novynskyi Foundation, to the mayor of Kharkiv, ...
Charity
Vadym Novynsky Foundation provided assistance to Zaporizhia hospitals in the amount of 15.1 million hryvnias
The executive committee of the city council of Zaporizhia appealed to Vadym Novynskyi Foundation with a request for external fixation devices as charitable aid.
Congratulations
Metallurgists and miners` day
...
Politics
Vadym Novynskyi resigned as a deputy
I have decided to resign as a People's Deputy of Ukraine and focus on humanitarian projects, on developming the national economy, serving the Ukrainian Orthodox Church and restoring destroyed churches.
Charity
Ukrainian Orthodox Church and Vadym Novynskyi Foundation donated 5 ambulances to Mykolaiv community
Metropolitan of Mykolayiv and Ochakiv Pitirim on behalf of the UOC handed over to Mykolaiv 5 ambulances that were purchased in Europe by Vadym Novynskyi Foundation.
Religion
Remembrance Day of Venerable Onuphrius the Great
On 25 June, the Orthodox Church honoured the memory of Saint Onuphrius the Great.
Charity
Another batch of ambulances from Europe - 16 cars
This week, Vadym Novynskyi Charitable Foundation delivered another consignment of ambulances from Europe to Ukraine. This time 16 Mercedes Benz, Renault, Opel and Volkswagen cars crossed the border.
Religion
Happy Holy Trinity!
Today we celebrate Pentecost (Trinity Sunday or the Trinity, as we usually call it) that is one of the main Christian holidays.
Subscribe to news